BLOOMINGTON — Ali Patberg is staying in Bloomington, but this time in a different role.

Patberg, who spent the last five of her seven college basketball seasons at Indiana University, is remaining with the Hoosier women’s basketball program. She was announced Friday as the team and recruitment coordinator.

“I would like to say thank you to Coach (Teri) Moren and the rest of the staff for believing and trusting me as I begin my college coaching career,” Patberg said in a news release. “I could not think of a better place and with better people to start this next chapter with. I will learn and grow as a professional from one of the best staffs in college basketball and continue to be a part of the Indiana program, which holds such a special place in my heart.”

Patberg, the 2015 Indiana Miss Basketball and McDonald’s All-American from Columbus North, was drafted in the third round by the Indiana Fever, but was released after about a week of training camp. The CoSIDA Academic All-American and Big Ten Distinguished Scholar has a bachelor’s degree in finance from IU’s Kelley School of Business and earlier this month picked up a master’s in recreational administration. 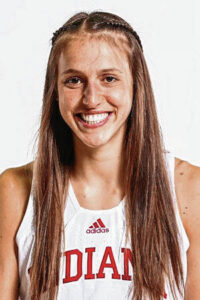 On the court, Patberg was a four-time All-Big Ten selection. She ranks ninth in school history with 1,752 points and third with 527 assists, and her 14.2 career points-per-game rank eighth. She was a two-time Nancy Lieberman Award finalist an a WBCA honorable mention All-American.

This season, Patberg averaged 11.6 points, 3.2 rebounds and 3.4 assists in helping lead the Hoosiers to a second consecutive NCAA Sweet 16 appearance.

“We are excited to have Ali join our staff in this capacity after such a successful collegiate career,” Moren said. “She has always expressed her desire to pursue a career in college coaching and we are happy she can begin that journey here. Ali is a true competitor who has helped us build this program and is a fantastic person that will impact our players on and off the court. We are looking forward to seeing her transition into a member of our staff.”