Although they were without some of their key returning players for a few of their basketball games this summer, several younger Columbus North girls were able to step in and gain some experience against varsity competition.

That experience, coach Brett White hopes, will pay off this winter, when the games count.

“It’s going to be about getting some experience and confidence,” White said. “We have three returning starters back, but outside of that, we have a lot of players with limited varsity experience. It will be a process, and hopefully as the season goes on, you’ll see them gain confidence as they get more experience.”

The Bull Dogs played 15 games during the month of June, when coaches are permitted to work with their teams in practice and game settings. They finished with an 8-7 record.

“In the summer, the way we approach it is, we try different stuff,” White said. “We put some things in offensively and defensively that we might do during the season. We’re not as worried about wins and losses.”

In a shootout at Avon, North went 0-2, dropping close games to Hamilton Southeastern and Avon. The Bull Dogs were without leading returning scorer Lauren Barker, and returning point guard Emma Long was limited for those games. Columbus North beat Bloomington North at Indiana Farmers Coliseum, then stayed there to watch the WNBA’s Indiana Fever play that night.

The Bull Dogs, went 1-2 in a shootout at University of Southern Indiana, beating Eldorado (Illinois) and falling to Owensboro (Kentucky) Catholic and Evansville Memorial. In those games, Long was out with an injury, and the potential starting frontcourt of incoming junior Kathryn Wilson and incoming sophomore Kennedy Horn had other commitments.

“Sometimes, it’s a little difficult when you have some pieces missing,” White said. “We have some multi-sport athletes. You don’t always have everybody that you’ll have during the season, but we were able to try some people in different positions. I felt like it was a positive for us.” 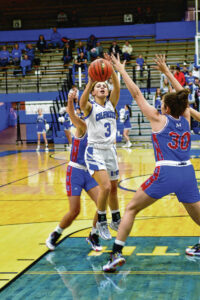 Incoming seniors Barker, Long and Kayla Jones are returning starters in the backcourt for a team that went 14-9 and won the Conference Indiana title. Wilson also saw plenty of action last year, and the 6-foot-2 Horn played early in the season before being sidelined with an injury.

“We’re excited about our younger kids and our juniors, as well,” Brett White said. “I felt like we made progress.”