The June period where basketball coaches are permitted to work with their teams in practice and game settings was an acclimation period for new Hauser coach Kyle Shipp.

The former Whiteland girls coach is taking over a Jets program that is coming off its best season in five years. He will look to continue that upward trend.

“One of the first things that we tried to do was to start implementing some of our terminology, some of our philosophies,” Shipp said. “Really, what we were looking for was just trying to implement the first step of what we will do in the fall and, of course, into the season. For me, the biggest thing was just trying to create our culture, working on our attitude, working on our effort. Those were the major goals of our summer.”

Shipp put his team through a mini-camp the last week of May. Hauser then played 15 games during the month of June.

The Jets played games at Edinburgh on Tuesdays and Thursdays for four weeks and participated in a shootout at Greenwood. They had 11 players at times this summer, but usually less when some were either on vacation or playing other sports.

“One of the major things we do at Hauser is get together as coaches to make sure kids are able to play their other sports, as well,” Shipp said. “One of the things that we focused on was being flexible with people to be able to play multiple sports, but coach them hard when they are there.”

Shipp said he will try to play as fast a pace as he can without turning the ball over.

“We call it ‘functional fast,’” Shipp said. “One of the things that we stress is that defense creates offense. We wanted to work hard this summer on moving our feet, getting in position. Then once we do have the ball, we want to reduce our turnovers, take care of the ball. We want to get the best shots we can through ball movement and player movement, find the open player. I thought we made tremendous strides in that area in the short amount of time we’ve had this summer.”

Hauser welcomes back four starters. Incoming junior Madelyn Poe led the Jets to a 10-13 record in her first season after transferring from Center Grove. 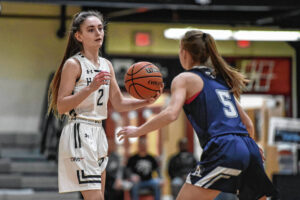