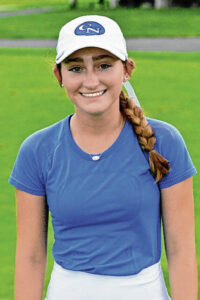 EDINBURGH — Ava Bunker fired a 6-under-par 30 to break the school record that she had tied a night earlier, but Columbus North fell to No. 5 Batesville 146-167 at Timbergate.

Erin Hopkins carded a 42 for the Bull Dogs. Ritisha Rashmil added a 43, Lindsey Hartwell shot 52 and Nettie Meeks had a 53.

SEYMOUR — Jennings County finished second in a tri match at Shadowood. No. 19 Bedford North Lawrence won with a 177 to 197 for the Panthers and 203 for host Seymour.

SHELBYVILLE — Hauser opened its season with a 4-1 loss at Shelbyville.

Levi Gollmer and Hunter Pappano beat Aiden Smith and Caden Claxton 6-3, 7-5 at No. 1 doubles for the Jets.

Hauser’s Caleb Wallace fell to Aiden Asher 6-1, 6-3 at No. 1 singles, and Jackson Burchman lost to Logan Prickett 6-1, 6-0 at No. 2 singles. JJ Dickey fell to Caden Tackett at No. 3 singles, and Jayden Blair and Jentzen Bechtel lost to Karson Smith and Reece Prickett at No. 2 doubles by 6-0, 6-1 scores.

NASHVILLE — Brown County fell to Martinsville 4-1 in its season opener.

HOPE —Hauser opened its boys and girls cross-country seasons by hosting the Hauser Hokum-Karem. No team scores were kept.

NORTH VERNON — Jennings County opened the season with a 6-0 win against Salem.

Abby McDonald netted two goals, and Maddie McIntosh and Audrie McClintock each added one goal and one assist for the Panthers. Macy Addis scored one goal, and Jennings’ other tally was an own goal. Chloe Franks and Manto Vaddel each had one assist.