Two teams with conference title aspirations will look to remain unbeaten in their respective leagues tonight.

“It’s an exciting week for us,” Columbus North coach Logan Haston said. “Homecoming, conference game, our guys have a lot of expectations, and they understand the pressure that comes with it. They’ve had a really good week of practice so far and are looking forward to it.”

The Bull Dogs have been out of the conference the past two weeks, falling to Class 4A No. 2 Roncalli and at 3A No. 3 Bishop Chatard. Columbus North played Chatard to a stalemate last week after falling behind 14-0 early in a 41-27 defeat.

“I feel really good about it,” Haston said. “Ultimately, we got off to a really slow start. We played a really good three quarters. Their fight was still there, and I’m proud of them for their effort.”

Bull Dog senior Zac Horn has completed 96 of 146 passes for 1,226 yards and 13 touchdowns. Senior Tyler Blythe has carried 71 times for 376 yards and three scores, and senior Cooper Horn has 34 catches for 722 yards and nine touchdowns.

“I think their offense is pretty impressive on film,” Haston said. “Their quarterback is a good athlete, and he has a good arm as well, and their running back is impressive. We have to match that, and we have to keep those guys contained, especially their quarterback in the pocket.” 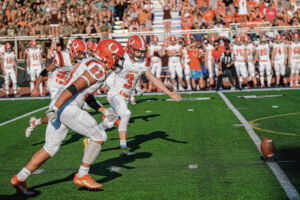 Meanwhile, East will make its second trip to Floyd County in as many weeks. The Olympians rolled to a 42-7 win at New Albany last week.

East forced six New Albany turnovers, scoring on two of them, and turned the Bulldogs over on downs three other times.

“We weren’t able to get New Albany off the field very well,” East coach Eddie Vogel said. “We bent, but didn’t break. We’re going to have to play better defensively. We were really fortunate to turn them over and get some points out of it.”

Olympians senior Ethan Duncan has completed 32 of 69 passes for 456 yards and five touchdowns. Senior Javeon Smith has carried 85 times for 471 yards and four scores, and senior Chase Zapfe has 12 catches for 127 yards.

The Highlanders (2-3, 1-1) are coming off a 28-14 win against Jeffersonville. Floyd Central is led by junior quarterback Tristan Robertson, junior running back Andrew Gibson and senior all-purpose player Cody Bibelhauser.

“They’re pretty balanced,” Vogel said. “Their quarterback is a really solid player. He can throw it pretty well, and he can pull it down and run some, similar to us. They have some good skill players, and their offensive line is pretty aggressive. They play a 4-3 defense and play things similar to how we play things. So it will be a pretty good test. “They always play us tough down there, so we know that we’re going to have our hands full.”