COLUMBUS, Ind. — Several hundred people showed up for a Bartholomew County Public Library meeting Monday to continue their input on an attempt to move “inappropriate” materials out of the library’s teen section, and those who say this amounts to censorship.

The public comment section of the library board meeting lasted about two hours, and became loud and heated at times, with people in the audience talking back to those they opposed or clapping in agreement.

Since April, a small group of people from local church Blessed Life Fellowship have been attending the library’s board meetings to complain about inappropriate materials in the teen section, library officials said.  Their main complaints pertain to books with sexual or LGBT content in the teen section, said Library Director Jason Hatton.

Library staff are looking at best practices around the state and country, as far as what other libraries are doing with teen materials, he said in a previous interview. The local library will also analyze its own collection, take a survey of teen materials and, if changes are needed, develop a plan.

According to Blessed Life Pastor Andy Robbins, the group from the church is not requesting to ban books but “simply to relocate them to an age appropriate section.”

However, at least one individual who spoke at Monday’s meeting expressed a desire for certain material to be moved or removed altogether, and the library has received material reconsideration forms for a number of books within the past month.

At the board’s September meeting, some members of the public pushed back against the church’s efforts, speaking about freedom of speech and the “freedom to read.” A similar situation took place on Monday, with both sides expressing their opinions.

Prior to Monday’s meeting, the Columbus Educators’ Association shared on social media that “supporters of the freedom to read” should attend the event.

“Support our library,” the teachers’ union wrote. “Speak up for the library, the community it serves, and for marginalized groups that deserve to see themselves represented in literature and media. Hate Has NO Place in Our Library.”

Hatton said library staff have received 12 reconsideration forms for various books. Individuals can use these forms to express their concerns about a specific item and how they believe the library should “deal with the material.” The form also asks whether the person has read or viewed the work and if they see any value in it.

“Gender Queer” is located in the library’s adult graphic section, not the teen section, said Hatton. The library has opted not to remove this book, but the decision can be appealed.

There are five other pending reviews for titles in the teen area: “100 Questions You’d Never Ask Your Parents,” “Be Gay, Do Comics,” “Ready For It,” “This Book Is Gay” and “Doing It.”

During the time for public comment, a number of individuals talked about the importance of providing diverse materials, creating a safe space for LGBT youth, engaging with difficult texts and not committing censorship.

“While I am aware that some in a community, from time to time, will take exception to materials on misunderstood topics, I applaud the way in which our public library thoughtfully serves people in the community who hold a wide variety of points of view without erasing one voice for the sake of another,” said Rev. Felipe Martinez, pastor of First Presbyterian Church.

“It meant the world to me everyone I walked into this library and felt like I was welcomed and belonged,” said Addison Grider, 18. “I grew up in a religious setting. And the religious setting that I particularly grew up in was not welcoming. I was not allowed to be who I was. And I was not allowed to tell people who I was. And walking into the library and seeing especially the sign that says ‘Libraries are for everyone’ just really, really meant the world to me. And at times, this place was the only place that I felt safe.”

Some speakers, such as Amy Thomas, said that parents who are concerned about what their children might read should handle the issue themselves by doing research and talking with their kids. Her 13-year-old daughter, Claudia, also emphasized the importance of having conversations with kids and expressed opposition to banning or moving books.

“If you relocate these, then kids will still read them,” she added. “I’ve gotten books from the adult section before. You cannot stop us. So I’m really sorry to inform you that these books, if you move them, will not keep you from parenting your kids.”

On the other hand, other speakers expressed concern about young readers being exposed to “pornographic” or “obscene” content and said that while they are not trying to ban books, they are concerned about what’s considered age-appropriate for the teen section.

“Why place these kinds of materials front and center and display them, as if to say ‘Hey, kids, come over and look here?’ ” asked Donna Robbins. “And that’s kind of what it feels like. It feels like it’s an in-your-face, ‘Here, here children. Let’s enter the world of sexual promiscuity. Let’s enter this world.’ And they’re too young for that.”

Additionally, she feels there is a “double standard” when it comes to what’s allowed, citing a conversation where her husband suggested to Hatton that the library add the book “The Specter of Communism” to its shelves. She said that Hatton was hesitant, in part because the publisher has a reputation for focusing on conspiracy theories.

Another speaker, retired teacher Jean Glick, said that she has read “Gender Queer” and acknowledged that the author tells a “heartbreaking story.”

She asked that the book be moved out of the teen section or removed from the library altogether. While Hatton said that the book is technically located in the adult graphic section, another speaker, Heather Wells, expressed concern about the proximity of that section to teen materials.

Others, including Robbins, accused the library of breaking state or federal statutes regarding distributing obscene materials to minors.

He also pushed back against accusations of being bigoted.

Democratic candidate files for Columbus mayor, but questions remain whether he meets the residency requirement 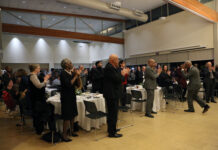 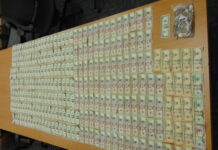