When Gabe Ridder joined the boys basketball team at Columbus Christian 3½ years ago, he never imagined he’d end up being the most prolific scorer and rebounder in school history.

But with several more games in his senior season remaining, the 6-foot-2 senior stands at the top of the Crusaders all-time lists in both scoring and rebounding.

“It’s a team thing,” Ridder said. “Many times, I get rebounds, and I’m there to get the ball and put it back up. I try not to be a selfish player and try to pass the ball to other teammates to get them involved. But I take the chances I do have to score.” 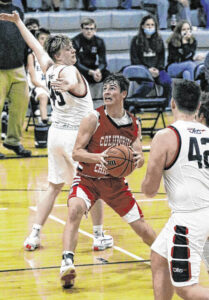 Ridder, who moved into the starting lineup as a freshman and has been there ever since, broke the school scoring and rebounding records earlier this season. He currently has 1,781 points and 1,026 through Tuesday’s 44-43 win at Crosspointe Christian.

“When I started playing as a freshman, it was not a thought,” Ridder said. “It was just a sport that I wanted to play. I never dreamed that I’d be where I’m at scoring-wise, so breaking the record is something that surprises me.”

Friday night, Ridder went over the 1,000-rebound plateau in a loss to Bloomington Lighthouse.

“Being in position is important and being able to get after the ball,” Ridder said. “It’s pretty important because there’s a lot of tall guys out there and a lot of athletic guys.”

Kevin Roth, who has been coaching at Columbus Christian for more than two decades, said Ridder is one of the top players to come through the program.

“He’s for sure in the top three,” Roth said. “There were a lot of guys — Logan Roth was a good all-around player, and back when we first started the program, both Chad and Pete Lawson were good players.”

Ridder is the second-oldest of five siblings in an athletic family. His older sister Ellie played volleyball and basketball for the Crusaders and now plays volleyball at Boyce College in Louisville. His brother Isaac is a freshman who plays mostly JV basketball for Columbus Christian. Eden is in eighth-grader at the school, and Elias goes to Hope Elementary.

Gabe, who also plays baseball for the Crusaders, was home schooled until coming to Columbus Christian his freshman year.

“It’s been fun,” he said. “There’s been some ups and downs in seasons, but I’ve enjoyed it. Obviously, I don’t know what playing in a big (IHSAA) sectional game is like, but I’ve had fun.”

For as long as Gabe can remember, he has wanted to play college basketball. He wants to go into business and sports management and has been talking to coaches at Grace University in Grand Rapids, Michigan. He plans to visit the school after the season.

The Crusaders currently are 14-10 going into Friday’s home game against Trinity Christian.

“At the start, it was rough, and then we slowly got things together,” Ridder said. “Then, we started getting on a winning streak, and then we hit Christmas break and we kind of got off track a little bit. But after that, we won a couple games and got back on track. We won regional my freshman year, but we haven’t won state or a national title, so it would be nice to do that my senior year.”

Columbus Christian plans to honor Ridder prior to Saturday’s home game against Crothersville.

“(Setting the records) feels kind of great,” Ridder said. “It hasn’t really sunk in yet. But knowing I’m going to be graduating leading scoring and rebounding, it just feels nice.”