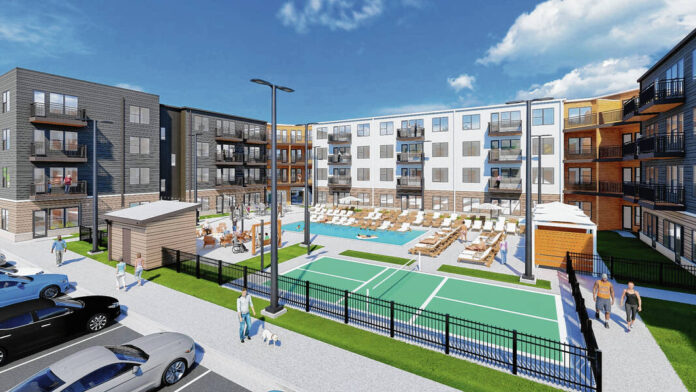 Executive Director of Public Works/City Engineer Dave Hayward presented the Columbus Parking Commission with a south downtown parking study on the subject. The study was done in-house at the suggestion of some of the city’s department heads and focuses on the area south of Third Street (ending near the railroad) from Jackson to Sycamore Street.

According to the city’s estimates, the biggest squeeze is likely to occur when work on the hotel conference center is underway, assuming this overlaps with other projects.

Current construction in downtown Columbus includes the new Bartholomew County Court Services Building at 555 First St., the Taylor mixed-use development at 725 Second St., and the 1821 Trail (which will run along First Street from Water Street to Lafayette Avenue).

Of these, the court services center is almost complete, though it will take some time for the probation department to transition into the space. Redevelopment Director Heather Pope said the department should be completely moved out of its old building by Sept. 1.

Also, the 1821 Trail is on track to be “considerably completed” in August, except for landscaping and possibly monuments as well, she said. Developer Flaherty & Collins expects to open the Taylor’s first units to residents in the summer of 2023 and reach full completion that fall.

Other construction planned for downtown includes the hotel conference center and the riverfront project. There is also utility work going on in the area, said Hayward.

“We’ve got a lot of things, and they start kind of creeping over each other,” he said. “And what the concern was, are we going to have enough parking in this area, south of Third Street, when all of these are under construction?”

With that in mind, officials projected how different phases of construction will impact parking availability. The city estimated that prior to the start of construction, there were 524 people and 920 parking spaces in the area, resulting in net parking of 396 spaces. The other phases were estimated as follows:

“It was a good exercise,” concluded Hayward. “I think we learned some things, but we found that we really don’t have much of a problem except for one period of time, possibly. And we’ll just need to manage our way through that when the time comes.”

He added that it’s possible that construction on the hotel conference center may not take place as soon as he’s projected. Since the planned location for the center is currently a parking lot for county employees and the probation department, this would mean more available parking in the meantime.

“The real deficit comes into depending on when the hotel and conference center go up,” said commission chairman Tom Dell. “Because that takes a big chunk of parking.”

Hayward agreed and said that the project is a bit of a “wild card.” However, both men also noted that a parking garage is planned as part of the development.

Commission member Kevina Schumaker wondered if there was a possibility of moving people into the Second Street parking garage during construction. However, commission members noted that the garage is only open to the public after hours and on weekends, with spaces reserved during weekdays for Cummins, Inc employees and tenants of The Cole Apartments.

“You look at the two parking garages that they (Cummins) have, and you wonder if they’re not going to be working in-house full-time, what does that mean for those two garages?” said commission member Jeff Baker. “I’m sure they’re not anxious to share them.”

“That’s a valid question,” said Hayward. “No only for the parking garages, but all their buildings. Who knows what they’re going to do?”

“We can have conversations with them,” he said. “…They haven’t been real receptive, but that doesn’t mean that that couldn’t change.”

Baker added that working on a hybrid schedule may have changed their perspective.

In any case, said Dell, construction will cause a shift in downtown parking. The city will need to communicate with the public about these changes and any parking alternatives that are available.

Schumaker also noted that they’ll need to ask the public for patience during this time.

“COVID set us back, and now we’re trying to get back on track,” she said.