If Columbus North is going to make its first trip to the Boys Golf State Finals since 2019, the Bull Dogs will have to beat at least two teams that are ranked ahead of them.

North is one of five ranked teams who will compete in Thursday’s Providence Regional at Champions Pointe in Henryville. Only the top three make it to next week’s state finals.

No. 2 Bloomington South appears to be the favorite, with No. 6 Center Grove, No. 7 Silver Creek, No. 11 Evansville North and the No. 16 Bull Dogs all vying for one of those three spots. Floyd Central, Jasper, Franklin and others in the 18-team field also could contend.

For the Bull Dogs to have a chance, they’ll have to play a lot more like they did when they shot 305 in winning Friday’s Greensburg Sectional than they did in shooting 339 in the Zionsville Invitational three days earlier.

“The golf course was a little bit different (at Greensburg) than what we faced up at Zionsville,” Bieker said. “Of course, we were without Tyler Wilks in the sectional. I see him back in the lineup for Thursday.”

Wilks, who has played No. 2 or No. 3 for the Bull Dogs most of this season was the odd-man out after a qualifying round at Greensburg last week. Following the Zionsville debacle, Bieker took his top seven players to Greensburg and had them play off for the five spots.

Junior Willy Davis won medalist honors with a 72 at the sectional.

“We did play pretty well,” Bieker said. “A 305 is a pretty good score. It was nice to see Willy Davis step up. I was proud to see John Merritt, who hasn’t played a lot of tournament golf, play a really good back nine and solidify the win for us.” 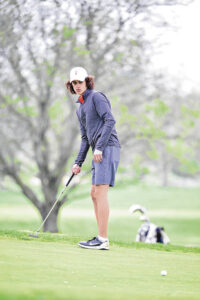 Columbus East’s Carter Greene reacts to his putt on No. 9 during a match against Columbus North May 4 at Otter Creek Golf Course.

Meanwhile, Columbus East will look to continue its late-season surge. The Olympians shot a season-best 334 last week against Bloomington North at Otter Creek, then had a 339 at the sectional, to edge North Decatur by one shot for the third-and-final team-qualifying spot.

“We’re still just worried about ourselves,” East coach Keith VanDeventer said. “We’re so excited to go. We’re thankful to be going, and our whole outlook is just to continue to improve and try to shoot another good score and keep us going in the right direction.”

Both the Bull Dogs and Olympians had a chance to play against many of the teams it will see in the regional in late May in the Providence Invitational at Champions Pointe. Columbus North finished seventh with a 319, led by Luke Schneider’s 74. East took 14th with a 343, led by a 77 from Pierce Arnholt.

“All our kids that day coming home, they felt like we were capable of doing better,” VanDeventer said. “So it will be nice to go back down and have a chance to improve on that.”