Although Donner Swim Club didn’t come away with a victory last weekend when it hosted its annual Jamie Miller Invitational, the club posted several notable accomplishments.

This was Donner’s second long-course meet of the season. Its first was a couple weeks ago at Franklin.

“We had a lot of new kids swimming in the meters pool for the first time in the first meet, so I thought everybody was really swimming well,” Donner interim coach Aaron Fry said. “It was good to get a base setting. Now that restrictions have left, we have a lot of kids coming back and little bit more participation. Some of those kids, it’s been two years since they’ve been in a long-course pool, so there were a lot of time drops there. I think we had good (time) drops across the board from everybody.” 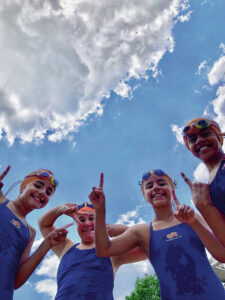 Close to 600 kids from 19 teams participated in the Jamie Miller meet over the three days in the 50-meter outdoor pool at Donner Park.

“It was a great meet, great weather, not too hot,” Fry said. “It was fantastic. We had good participation from all the teams. Everybody had a good time.”

Donner returns to Franklin for a meet next weekend, then heads to IUPUI’s Indiana University Natatorium the following weekend. Senior State is in the middle of July, along with a meet at Seymour. The long-course season concludes with Age-Group State and Divisionals at the end of July.

Fry will continue as interim coach through that time, after which he will turn over the reins to new coach Michael Cunningham. Cunningham currently is wrapping up his duties with CATS Aquatics Club in the Chicago area.

Cunningham came out to Donner on Thursday to talk with the coaches and help them set up for the meet, then was in attendance for part of the day on Friday.

“He’s a very outgoing guy,” Fry said. “He wanted feedback from the kids. He was asking them what they like about the club, what they like about swimming. He’s really engaging. He seems like he’ll be a good technical coach and be able to teach, but also really relate to the kids and grow the team.”