The Columbus North girls reached the top of the mountain last cross-country season, winning the state title in Terre Haute. With the top three runners back from that team, the Bull Dogs will look to do it again.

Here is a look at North and the other area girls cross-country teams heading into the 2022 season:

The Bull Dogs enter the season ranked No. 1 by IndianaRunner.com. But coach Rick Sluder said his team is comfortable in that spot and doesn’t feel there’s a target on their backs.

“It was the same thing last year,” Sluder said. “It was us and Carmel the whole season, and we were ranked No. 1 about halfway through the year, so we feel comfortable with that. Plus, our girls really look at it is, ‘Different year, different team,’ and we have to go earn it in 2022 like we earned it in 2021.”

“We think that all three of them are top-15 candidates in the state,” Sluder said. “Starting with those three is really going to help us every meet.”

Senior Sydney Morlok finished 62nd at state. Senior Julie Klaus also is back after missing last cross-country season with an injury and joining Baker and Newell on the state runner-up 4×800-meter relay team in track this spring.

Junior Ellen White and senior Jessica Meza have run in plenty of varsity races the past couple of years. Sophomores Kyleigh Wolf and Sierra Newell are coming off strong track seasons.

“I feel like we’re just as deep as last year, if not a little stronger,” Sluder said. “So we’re really excited, 15 or 16 deep on our team right now.”

The Olympians have made a habit of making it to semistate, and will look to do that again in October.

“We’re going to be a competitive team again,” East coach Jesse Shoaf said. “Our goals are to be one of those top three teams in conference and try to get to semistate. The last few years, we’ve been able to get there.”

Shoaf is happy with what he’s seem out of his runners through track seson and this summer.

“We had a decent first week,” Shoaf said. “We had a good summer of training. We have a lot of new positions to fill. We had a lot of seniors last year, so we have some opportunities for some new runners to fill those spots.” 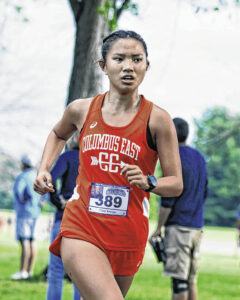 Battling for the other three varsity spots are junior Jami Porter and sophomores Madison Swartzentruber, Hayden Carothers and Amelia Fay.

“I think they’re going to be competitive for those spots,” Shoaf said. “We’ll see where they are condition-wise in the next few weeks. There may be a couple others once we get going that are going to surprise us.”

With five runners, the Jets have enough to score as a team this year after having only four last season.

Senior Amanda Steward was a regional qualifier as an individual last season. Senior Reiss Kistler is the other returner.

Hauser added a pair of sophomores from its softball team that made it to the state’s final four in Class A this spring in Madison Hollman and Lucie Asher. Senior Bronwyn Newcomb also is new this season.

“I’m excited,” Hauser coach Ben Finke said. “I think the girls are excited. They worked hard to get five together, so I think it means a lot to them. I think a lot is going to depend on those sophomores and how they come along.”

After having only five runners last season, the Panthers have 14 this year.

Four of those runners are returning from a team that qualified for semistate. Senior Halle Franks and sophomore Avery Willhite were the top runners, and senior Grace Gambrel and junior Sarah Poole also return.

Junior Taylor Leak and freshman Molly Wathen are the top newcomers. They are joined by freshman Kambrie Maschino and sophomore Haley Vogel, who currently is recovering from an ankle injury.

Going from five to 14, they’re all very positive,” Jennings coach Amanda Young said. “They show up to work. They all put in the work and the time, so I’m hoping that we’re going to peak at the right time and be competitive at the end of the season. I’m really excited to get the season started to see where they stand.”

The Eagles return an All-State runner in senior Hadley Gradolf, but might not have enough to score as a team again this season.

Gradolf finished 23rd at state last year and was a state qualifier in the 3,200 meters in track this spring.

Junior Livie Austin is the only other returner. Freshman Sadie Hiatt and sophomore Megan Cumberlidge are new to the team.

“We’re trying to find someone,” Abraham said. “Hopefully, once school starts Wednesday, we can pick up some more.”

The Cougars return most of their runners from a team that qualified for regional last year.

“These upper classmen and experienced runners are ready for the task of being small but mighty,” South Decatur coach Bethany Fromer said. “We have become a close knit team and work together. We work hard at practice but use the team bonding time as building the closeness of the team. We have already been working hard at hills and logging the miles. We are building are junior high in the same way so that we have a strong group of eighth-graders ready to step up and fill next year.”

The Lancers have only three runners to begin the season.

“We’re just working on getting endurance,” Edinburgh coach Amy Schilling said. “They didn’t run much this summer, as far as distance goes. Hopefully, we can get them ready by conference time.” 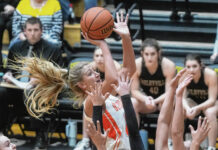 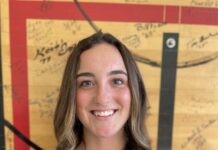 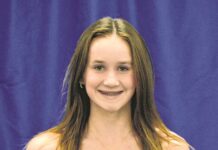