Ilya Schwartzman has seen his share of torn ACLs during his tenure as Columbus East girls soccer coach, but not to two of his top players at the same time.

The Olympians will enter this week’s Franklin Central Sectional without arguably their best player in senior midfielder Norah Dwenger. The four-year starter, who has nine goals and a team-high 10 assists, tore her ACL in the first couple minutes of Thursday’s regular-season finale at Seymour.

“It’s a move that I do all the time,” Dwenger said. “I was dribbling down the sideline and I kind of landed on it wrong. I had high hopes for this year’s sectional. I’m not unfamiliar with this situation because both my sisters tore theirs. It’s rough. But I’m happy that I got most of my senior season in.”

Another four-year starter, center back Alexis Spurgeon, tore her ACL early in the season. She returned to action last week and played with a brace on her knee. 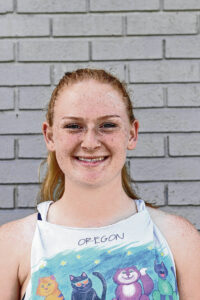 Both Dwenger and Spurgeon have been slowed by injuries before. Spurgeon missed most of her freshman year, and Dwenger was out most of her sophomore season. Both, however, were able to return for the sectional those years.

“It’s certainly unfortunate for them to suffer significant injuries like that,” Schwartzman said. “Hopefully, they will recover and be able to do what they would like to be doing physically.”

If Spurgeon needs a break, Hallie Randle or Emma Patterson could fill in at center back.

Taylor Scott, Liz Deckard and Cami Warren will combine to replace Dwenger at her right outside midfield spot. Left outside midfielder Maggie Mathews also could slide over to the right side if needed.

“(Dwenger) was a definite outside threat that other teams frequently doubled up on,” Schwartzman said. “It definitely will be a challenge to replace the production in that spot. For any team to overcome significant injuries like that is difficult. But we have capable players that can step up and produce by committee. We’re looking for other players to step up and pick up the load that we need to pick up. Adversity is something that the good teams have to overcome, and we’re certainly capable of doing that.”

Dwenger is hoping to get in for surgery in about three weeks at Methodist in Indianapolis. She was undecided if she was going to play college soccer prior to the injury, and that has not changed.

“It depends on where I’m going to go for school,” Dwenger said. “I’m not sure how it’s all going to work out yet.”

The Olympians open sectional play at 6 p.m. Wednesday against Franklin. A win would put them in Thursday’s 8 p.m. semifinal against Greenwood or Franklin Central. Columbus North will face the Whiteland-Roncalli winner in Thursday’s 6 p.m. semifinal, and the sectional final is at 2 p.m. Saturday.