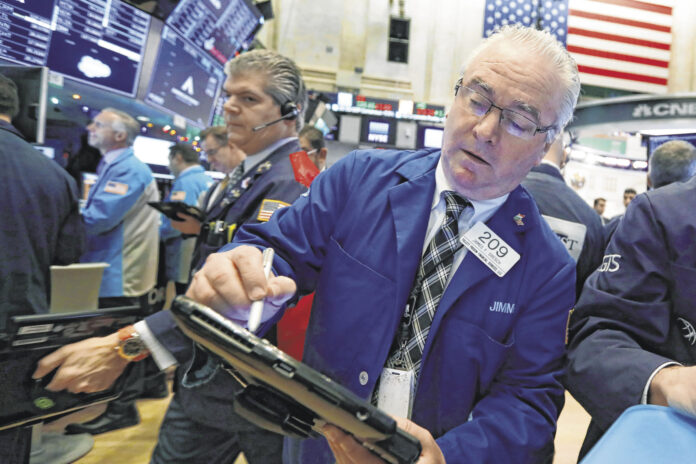 Stocks closed broadly higher again on Wall Street Tuesday, adding to weekly gains for major indexes that have been mired in a broad slump amid inflation and recession concerns.

The S&P 500 rose 1.1%, with roughly 90% of the stocks in the benchmark index notching gains. The Dow Jones Industrial Average rose 1.1% and the Nasdaq composite ended 0.9% higher.

Trading was choppy, at one point pulling the Nasdaq into the red as technology stocks lost ground then rallied by the end of the day. It was the latest knee-jerk motion in a market that has been moving erratically in recent weeks. Major indexes are still stuck in a bear market, which is when they’ve fallen at least 20% from their most recent all-time highs.

“High volatility is normal around the bottom of a bear market,” said Jeff Buchbinder, equity strategist for LPL Financial. “One reason we may be seeing markets hang in there a little bit better is that the narrative has switched to earnings from inflation and the Federal Reserve.”

Investors are primarily focusing on the latest round of corporate earnings this week, given there’s little economic data expected. Investment bank Goldman Sachs rose 2.3% after delivering results that beat estimates, which helped lift shares in other lenders. Banks have been rallying since Friday, when several reported strong quarterly results.

Health care giant Johnson & Johnson slipped 0.3% after reporting solid financial result s, but a narrowed forecast as it deals with a strong U.S. dollar cutting into sales outside the U.S.

Netflix surged 14.5% in after-hours trading after its latest quarterly results topped Wall Street’s forecasts. The streaming giant also reported an increase of 2.4 million subscribers during the July-September quarter. The stock fell 1.7% during regular trading before the company released its earnings. Its shares have lost more than half their value so far this year.

Corporate earnings are the latest pieces of information Wall Street can use to try and get a better sense of the economy’s path ahead amid stubbornly hot inflation and growing recession fears. The Federal Reserve has been raising interest rates in an effort to make borrowing more difficult and slow economic growth. The goal is to hit the brakes on the economy just enough to tame inflation, but the strategy risks slowing the economy too much and causing a recession.

“You have to stomach some volatility in the near term, but inflation is coming down,” Buchbinder said. “Work by the Fed and the markets has really improved the inflation outlook from here, if you can look three to six months out.”

Inflation has been cooling in some areas of the economy, but remains stubbornly hot. That has prompted the Fed to remain on track with its plan to continue increasing rates. The central bank has already raised its benchmark interest rate five times this year, with the last three increases by three-quarters of a percentage point. Wall Street expects another raise of three-quarters of a percentage point at its next meeting in November.